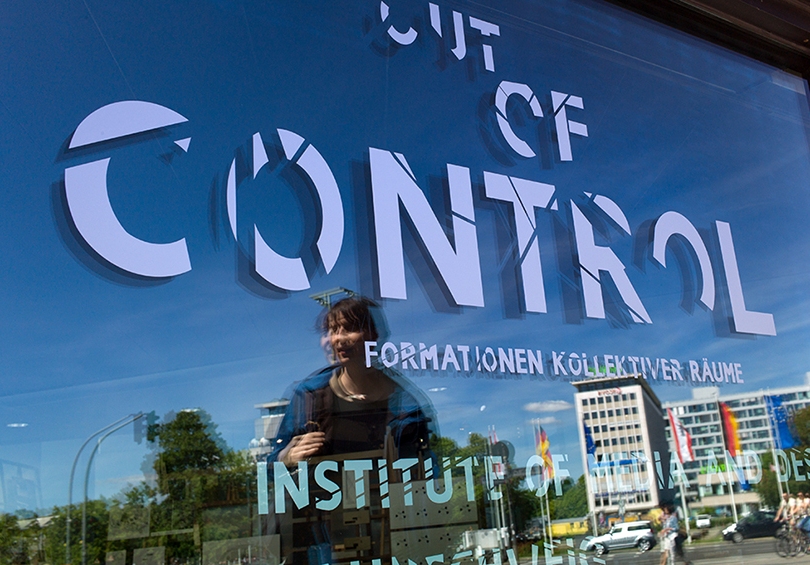 Out of Control. Formationen kollektiver Räume
Location _IBM Building, Ernst Reuter Platz No. 2, Berlin
Supported by _Bundesministerium für Bildung und Forschung _BMBF
Concept _”Out of Control” describes a protest concept in which the demonstrators disperse seemingly spontaneous and gather again elsewhere. In this way, the boundaries between the protest march and the surrounding area will be dissolved and the monitoring of events is systematically more difficult. This form of action takes a primary role in the exhibition and is paradigmatic for the development of new concepts of action-oriented space, which is non-centrally organized and non-predictable. “Out of Control” is dedicated to the city as a place for Community action in the public sphere and illuminates the interplay of spatial order and collective actions. Major protest events of the 20th Century – from 17 June 1953 in Berlin until 28 January 2011 in Cairo – are reconstructed in time and space and represented in diagrams, maps and structural models. The transformation of urban spaces through collaborative actions in this case is investigated as well as the facilitation of collective action by spatial structures. Basis of the reconstruction are eyewitness reports, police reports, image offers of agencies, but also amateur pictures, private Internet videos and blog entries. The exhibition “Out of Control” opens up a different interpretation of historical events by providing the reciprocal effect relationship between space, time and movement in the foreground. In architectural designs of well-known gathering places in Berlin and Cairo, the question examined is how the characteristic features of protests and celebrations can be transferred to the architecture. How can the consolidation of activities and actors, the openness and accessibility of the space and the ecstatic state of the Un-Planned be architecturally translated? How should the built space be configured so that collective action can arise? And which role does social media play today in the constitution of real-physical spaces of action?

The exhibition is presented in the glass gallery of the former IBM Tower at the Ernst-Reuter-Square in Berlin. This room received the name “electronic brain behind glass” in the 1960s, because the first IBM computers were publicly exhibited here.

Back to main page